Mike is able to join me for our second OB appointment, which goes very well.  My doctor confirms the baby's due date of June 13, 2012, but after remembering I had my first baby one week early, he predicts this baby will come a bit before the due date as well.  And since my first pregnancy led to a relatively short labor and delivery for a first time (11 hours), he makes another prediction that things will go even faster the second time.  Even though I was pushing for 2 hours (although he said it could have been much longer given that the baby had such a big head size), he predicts this stage will also go much faster.  He makes a joke about Mike's needing gloves for the car, and I recall how our cousin's second baby arrived just minutes after she reached the hospital (she was still wearing her t-shirt from home!).  My grandmother also told me how each of her five labors became shorter and shorter, until her fifth child was actually born in the car!

Since my water broke before my hard labor started during my last pregnancy, I do wonder if I'll be certain of when I really am in labor.  It was easy to know last time.  Or, I guess I should say, it was easy to know when to go to the hospital (you're supposed to go fairly soon after your water breaks; it's possible they'll release you if you're far from labor, but usually they don't. And in my case, by the time I was at the hospital, my contractions were a minute apart, even if inconsistent, and I was definitely in labor).  The night before I had the baby, I had been having many hard braxton hicks contractions, and when my water broke, they continued, to the point where I couldn't comfortably walk around when I was having them.  I still believed they were just braxton hicks, but in hindsight, most likely, I was in labor.  But I guess I was also in a little denial!

So this time around, I'll have to be a bit more serious about knowing when to go to the hospital, should my water not break first.  Because, yeah, I don't particularly want to suit up the car for delivery. 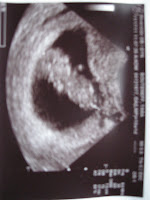 Again, the appointment grounds me into remembering just how real this little life inside of me is.  I have had some morning sickness this time around (although it was never as bad as many women get, and the worst was over by 8 weeks) and I have had some heartburn, which remind me that, yes, I'm pregnant. But I need these appointments to show me I'm carrying our child.  And this time, the proof is right in front of us.  The doctor does another ultrasound and we get to see our little baby moving and wiggling around!   I say, "Is that its head?  At the bottom left?"  "Yup," says my doctor.  "And those are the eyes?  And the arms are moving to the head right now?"  "That's right! You have a real wiggler there!"

Mike and I are wowed.  Our baby is moving and twisting and spinning.  This is all going on inside of me and I had no idea s/he was so active already.  It is another realty check.  Over the past month, life has continued as usual.  Our son has been amazing and perception, creative and funny, opinionated and challenging, but loving and sweet.  It really is different the second time around.  I'm a full time stay-at-home (SAH) mom, and my son takes up so much of my energy and thought.  So when I am here at this appointment, when my son is at home with his grandmother, I remember I am the mother of a tiny baby too.  And I like this grounding moment.

After the appointment, Mike and I see a matinee movie together, which is a nice treat.  We savor these appointments, these afternoon dates.  It is a nice time to reconnect with each other, and with our unborn child.  (But yes, of course, we can't help spending some time talking about our other active child too. :)
Posted by Tara M at 12:28 PM

I know there will be 2 beautiful, active boys in your home!