Mike and I attend our 32 week OB appointment today. Once again, the doctor is reassuring, telling us everything is progressing absolutely perfectly. My weight is great, the size of my uterus is exactly on target, and the size of the baby feels right. The heartbeat is good, as well, and here we test out a little theory Mike and I have.

When the doctor uses the fetal doppler on my belly, the baby tends to kick or punch exactly where the "wand" is on my belly. The doctor says the baby cannot hear the doppler, except for what we hear as it plays in the room. I have always sensed the baby is responding to something more than the outer-womb noise, since his kick is concentrated directly at the wand itself. 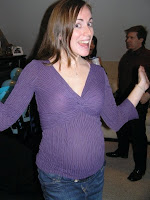 So for this visit, Mike has been planning to ask him to test out our theory. He wants to try the following actions in order to isolate the cause of what makes the baby react.

1) Put the wand on the belly without turning the equipment on. If the baby kicks here, it would show he is responding to the physical pressure of the wand itself.

2) Turn the machine on, so the baby hears the sound of the machine, but keep the doppler wand away from the belly. This would show if the baby is responding to the mechanical sound of the instrument.

3) Turn the machine on and put the wand on the belly but without the speaker sound in the room. This would show if it is the internal sound from the waves that the doppler is emitting, as Mike and I suspect. 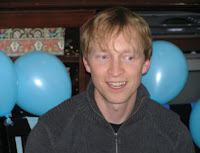 I mention that Mike wants to test out this theory to our cousin before the appointment and she says, "The doctor's probably going to look at you like--what?" And it would be a valid response since it is an odd request. I know several doctors I've had before who would not take the time to humor us or at least seem annoyed by our asking.

However, our doctor is so pleasant, that when Mike says, "Hey, we wanted to try something this time with the doppler," he simply responds, "Sure, what do you want me to do?" As Mike explains, our OB does as my husband instructs and even plays along asking, "Do you feel him moving?" to me at different phases. I love that he is open to this, remains very good natured, and takes his time with us.

The results? The baby doesn't move in situation #1 or #2. He does not immediately move with #3, but then the doctor says, "Well, we can get him to move if we stir him up a little," and he swishes the wand around a bit. Of course, this sort of defeats the purpose of our "scientific study," but yes, the baby does punch at me. However, he does not kick directly at the wand, as he has done in the past.

So our study is slightly polluted, and we don't get the expected results anyway.

What a cool experiment! And, what a great doctor! You are lucky to have someone who listens and responds to you. I think you have hit upon a potential research study.....!

So glad things are going well, and that you have so many friends to share with and have support from. And, it looks like you will have a playmate for Baby B soon from one of them!

Yeah, Dr. Turk is a keeper, he is. A great guy whose calmness could defuse a live bomb. Though I wish his scientific method were a little cleaner and more exacting for our experiment.