Mike is reading The Expectant Father, and one short section refers to the irrational fears some men have that they are not the father of the baby. It tends to stem from a feeling of inadequacy or insecurity, i.e.: "I can't be good enough to have made that baby, so someone else must have done the job."

Mike hasn't felt this way (he's a secure guy), but we did have someone doubt his paternity the other day...our doctor! 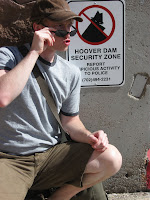 So my blood type is A negative. Over 85% of people are positive (10th grade Genetics reminds me it's dominant), so chances are our baby would be positive, as well. This could cause a problem, as if my blood mixes with the baby's blood, my body would see the baby as an intruder and try to attack it (which could cause brain damage and even death). Once these antibodies are formed, they are there forever, so all subsequent pregnancies would be very high-risk.

Luckily, there is a shot that I will receive at 28 weeks and at delivery, which solves this. It's basically rh positive blood from donors which prevents my body from making the deadly antibodies. (Btw--this does not happen when the mother is rh positive and the baby is negative.)

Of course, I'm not too keen on other people's blood being injected in me unnecessarily, and I read that if the father is also rh negative, then the baby would be rh negative (again, Genetics). No shot needed; no antibodies would form. Rh negative won't attack rh negative.

So Mike and I are at our last OB appointment, and I bring this up to the doctor. I tell him Mike doesn't know his blood type, but should we get him tested to see if he's negative to know if I actually need the shots. He cuts me off pretty quickly with that train of thought.

"Well, even if he is negative, we still would give you the shot anyway," he says.

Then, with a mixture of matter-of-factness and sheepishness, he states, "In case he's not the father."

Okay...
Mike and I smile at each other and kind of laugh. I think Mike or the doctor makes a joke about the milkman, and I assure Mike he is, indeed, the father.

I thought that was interesting though...I met a woman in Las Vegas who was rh negative and her OB said the same thing to her! So I guess doctors figure, better be safe than sorry!

But when the baby comes out of the womb, grabbing a guitar with one hand and a blog with the other hand, then any of Mike's fears will be laid to rest...

Yes, Mike! No need to be suspicious, what with your Hoover Dam security signs and all. This baby is yours! :)
Posted by Tara M at 9:16 AM

So, as a doctor who specializes in delivering babies-- I will test the dad and not give Rhogam if the women insists he is the father, preferably when he is not there...

Thanks, Ben! :) We are excited--and our due date is your daughter's birthday (as yours is the day after ours).

That is good you trust the mother if she insists... :) But yes, alone is probably the best way to get the honest info. I do understand their rationale, but you know...

I stumbled upon your blog as I nervously googled "Stamford hospital and Rhogam" because I had to have this shot this week at the Infusion center at 28 weeks and wasn't to crazy about having to have it too. Thank you--I found comfort in finding that there are other women out there too in my area who are rh negative and have to get this shot because it seems to be kind of rare! :)

Hi, Anonymous! :) It is definitely more rare to be RH negative. But we're out there, and as much as I didn't like the idea of it, it was a good idea. My baby turned out to be A negative like me, so we actually still thought Mike might have been rh neg too. I remember I kept reminding them in the hospital that I needed my second shot, after he was born, but then they informed me, nope, I didn't--he was neg! But I had the rhogam shot for my second pregnancy also, and he turned out to be A positive! So, I guess Mike is not rh neg after all! Best of luck in your pregnancy! I hope it goes really smoothly. I'm curious if you have the same OB I had (Dr. Turk?), and if so, you're in great hands!