Third Doctor's visit--it looks like a baby! Sort of...

We have our third doctor's visit today. Mike had forgotten about the appointment, so he scheduled a meeting at work, but at the last minute, he decides to do a conference call on his cell instead, so he can accompany me. While I drive and sit in the waiting room, he wheels and deals on his cell phone, and finishes with enough time to even read a travel magazine article and start to do a silly dance in the waiting room. I'm glad he's come.

So--I have opted not to have "sequential testing", which is a sonogram and bloodwork that tell you if you have a greater chance of having a baby with downs syndrome. I figure, my chances are low that is the case, and I'd rather not have unnecessary sonograms. They can do bloodwork and will do a sonogram later anyway, which can tell pretty much the same thing, so why bother with an extra sonogram now? While US doctors and reports will say they are safe, it is still debatable, and there have been studies done in other countries to indicate they are not necessarily completely harmless (and if you think about what a sonogram is, it makes sense that it would at least cause some disruption).

The cool thing with the sequential testing though is that you get a 4D image of your baby, which is wild! One of my friends who is 5 days ahead of me had it done and the pictures are amazing. It was tempting, for that reason alone, to get the test--but entertainment is not the right reason for me personally to do it. 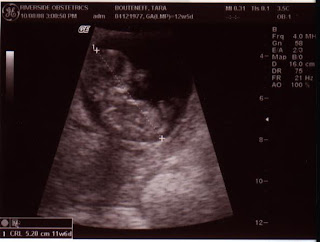 However, when I have my visit today, he does one anyway! And this is the standard b&w picture, so I didn't even get the cool 4D.

The thing is, this time, I don't even realize what he's doing. My first 2 ultrasounds have been transvaginal, so it's pretty obvious, but this time, he does it on my belly, after the nurse mentions listening for the heartbeat, so I assume that is what he is doing. Then I suddenly see a picture of our baby on the screen!


It is a quick ultrasound, and I tell him after that I want to avoid unnecessary sonograms. I think he feels a little bad or embarrassed, but now he knows.

Since Mike and I are caught off guard when the sonogram comes up, we cannot enjoy it as much as we had before, but still...I cannot stop looking at the picture! The baby is over 2 inches long, and it looks more like a baby than ever. the heart beat is strong, all is positioned well.

We leave the doctor's appointment, and instead of going back to work, Mike suggests we go out to eat to celebrate. I choose an Indian restaurant which we haven't been to in a while. I love Indian food, but it's a little hard on my stomach at times, so I tend to avoid it. But today is special, so we have an amazing meal and leave with leftovers. Mike then goes back to work and stays until 11pm! At least he has a full stomach...
Posted by Tara M at 3:00 PM